Home / Blog / Are LED Lights Right For Your Trailer?

Are LED Lights Right For Your Trailer? 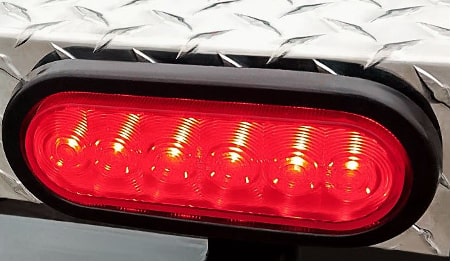 Anyone who has hauled a trailer around Michigan knows how important it is to have the proper trailer lights working. Not only do they keep you safe by helping make you more visible to other motorists, but they also keep the MSP off you back.

There is a growing trend of moving away from traditional incandescent bulbs to LED lights. Is this a good idea and is it something you should invest in for your trailer?

Before discussing LEDs, it is important to understand some problems with traditional incandescent bulbs. To start with, these bulbs get very hot because they burn a filament to produce the light.

This poses several problems, including making them vulnerable to temperature variations, not to mention posing an injury hazard. Further, they are more prone to rusting in the socket, leading to replacing the entire light assembly rather than a simple bulb.

Incandescent bulbs also tend to lose some of their brightness over the life of the bulb. This means that as the bulb ages, they do not provide the same visibility and safety.

LED lights help solve all of these problems, plus more. Let’s explore what you can expect if you decide to upgrade your trailer lights.

LED stands for light-emitting diode, and they work differently than do incandescent bulbs. Rather than burning a filament, light is emitted simply by the movement of electricity through the semiconductor.

These do eventually wear out, in which case the LED simply stops working altogether. For performance, this means you see no reduction in brightness before the light gives out.

One of the problems with a hot light bulb is the tendency to break when it experiences a drastic temperature change. A key point and case is for boat trailers when you move it into the water to load or unload. This creates a major headache of having to constantly replace bulbs, covers, and even seals.

LEDs do not have this same problem. The bulb produces a narrower band of light, so it produces much less heat. This prevents the effects of temperature sensitivity compared to traditional bulbs.

Plus, LEDs being physically cooler means there is less risk of burning anyone who touches the bulb. If you need to replace the bulb assembly for some reason, you don’t have to wait for it to cool down before you can be on your way again.

Part of why incandescent bulbs only last as long as they do is because of the filament that burns. Being LEDs do not use a filament, they do not run the same risk of burning out.

They will eventually wear out, as every electronic component does, but the life expectancy is far greater. The average incandescent bulb lasts roughly 500 to 1,000 hours. LED bulbs are often rated as high as 25,000 hours. Some reports suggest that these numbers are not accurate, but even at half of the rated hours, you will get 12 times the life or more.

For context, if you have the lights on for eight hours a day, that means your bulbs should last at least four years. If they last the entire rated life, that is eight years…and that’s leaving them on every day, 365 days a year, for eight hours. For most of us, we will never come close to that amount, which means you may only need one set for the entire life of the trailer.

Not Dependent on Single Bulb

Another fantastic feature is that LEDs are not dependent on a single bulb. Rather, many marker lights have three to five LEDs in the assembly. Brake lights will commonly have as few as six diodes but may have upwards of 40, depending on the particular assembly. Even if a few diodes go out, you still have the protection of the light, and are still legal.